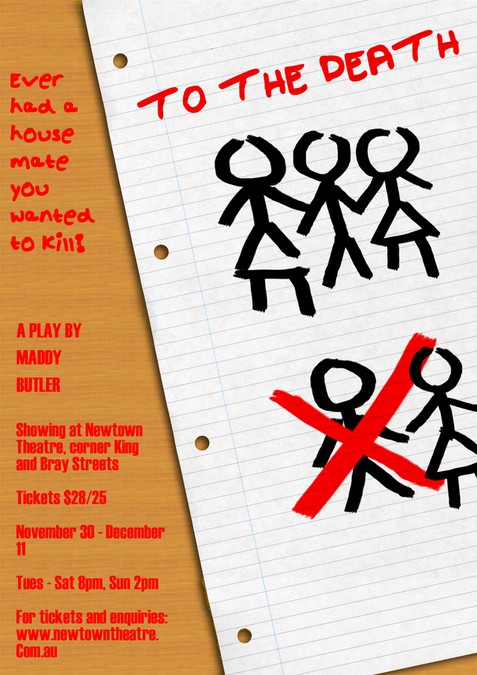 Theatre play 'To The Death' needs a new design

Serefisler needed a new other design and created a contest on 99designs.

A winner was selected from 30 designs submitted by 12 freelance designers. 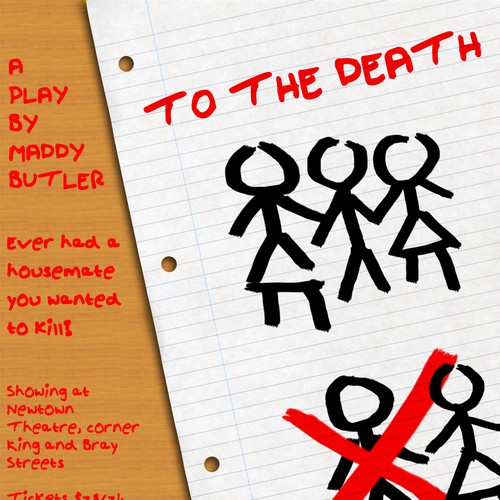 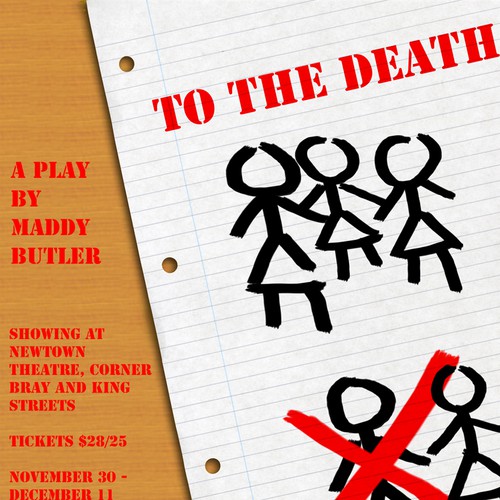 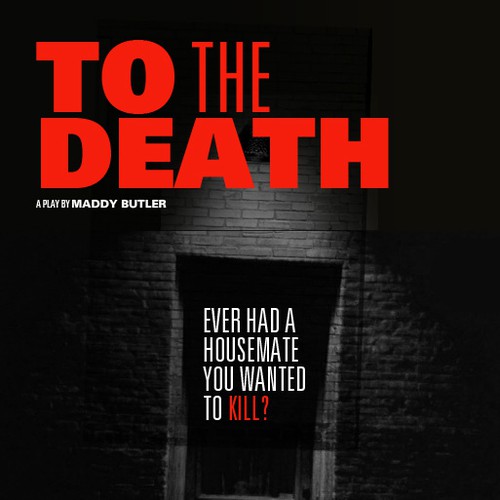 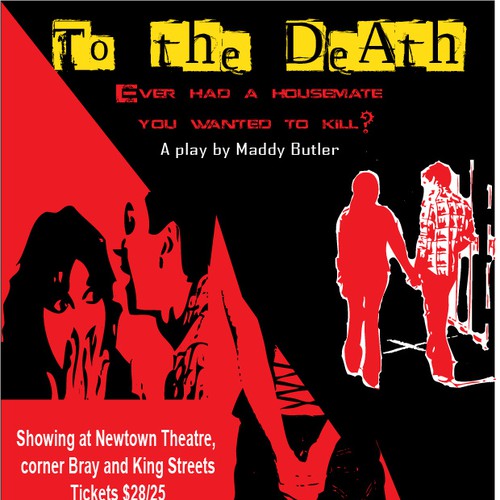 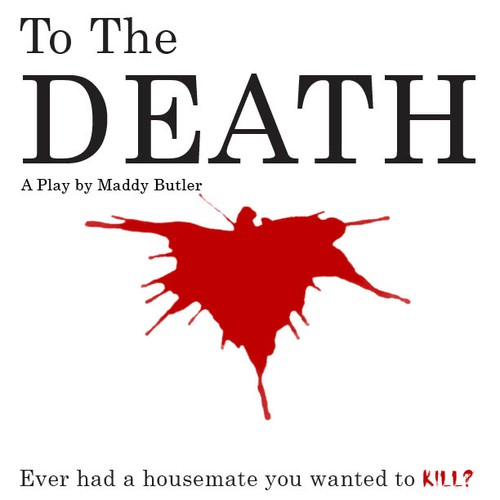 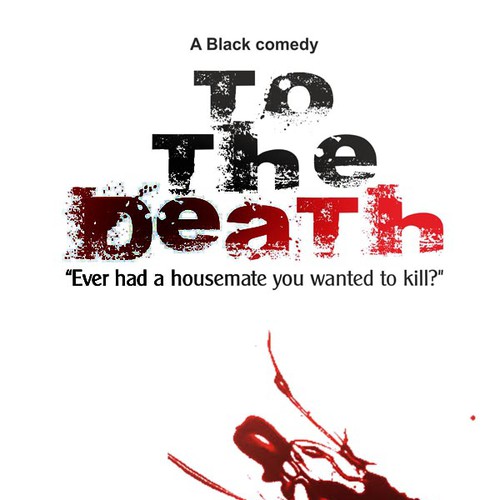 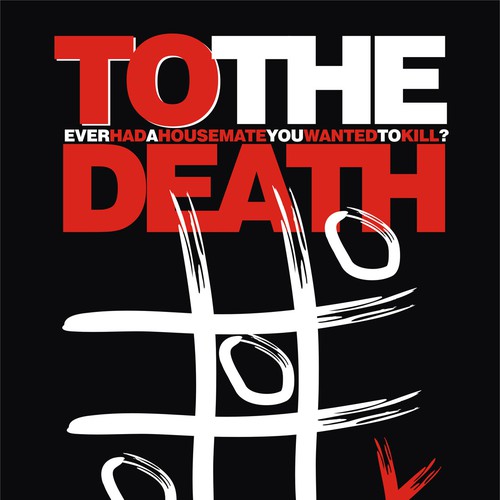 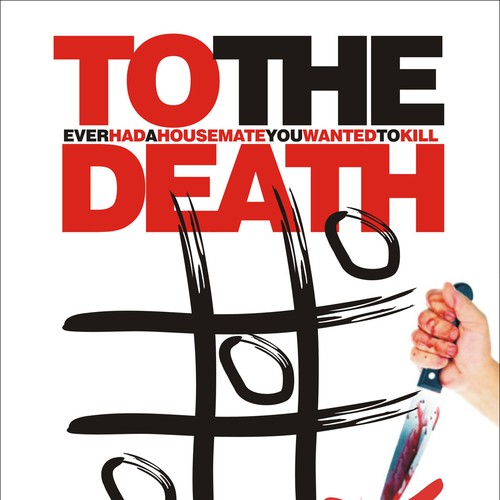 Winner - ChriSeaman
Working with ChriSeaman was, in one word, wonderful. Everything from the quality of art he produced to the manner in which he handled feedback was phenomenal. I'm extremely happy he decided to enter my contest and he most definitely earned the reward. Top notch designer - would highly recommend.
- chrisj81

How Serefisler started their other graphic design journey

Theatre play 'To The Death'

'To The Death' is a dark comedy about 3 flatmates who are trying to kill the boyfriend of a 4th flatmate. It will be performed in December at Newtown Theatre in Sydney. It is being put on stage by young semi-professionals.

What inspires you and how do you envision the design for your business?

We would like to have a poster designed that would catch the attention of theatre-goers.

The synopsis:
Rowena, Eric, Sasha and Vale were living in their perfect house share. Until Adam, Vale’s boyfriend, entered the scene.
Disgusted by his seemingly violent nature and worried about their friend, Rowena, Eric and Sasha plot to murder him. When the group decides to include the ignorant Adam in their plans, things turn both humorous and awry. Black comedy To the Death toys with relationship dynamics and misrepresentation, reminding us that things might not always be as they appear.

Details about the poster:
It would have to feature our tagline: "Ever had a housemate you wanted to kill?"

Other information would also have to be present on the poster. These include:
"A play by Maddy Butler"
Showing at Newtown Theatre, corner Bray and King Streets
Tickets $28/25
November 30 - December 11
Tues - Sat 8pm, Sun 2pm
For tickets and enquiries:
http://www.newtowntheatre.com.au

The director has indicated the poster could have a sketch of the 3 flatmates trying to kill another. This would conjure idea of children (ie young adults who are acting like children) and the comedic side as well. The stick figure idea is attached.

Another idea: "TO THE DEATH" and in the first O a gunshot with blood seeping out. Something like that. Or TO THE DEATH with different colours seeping through for the whole poster.

Although the attached sketch and the 'blood seeping out' are our ideas, we are also interested to see what the synopsis evokes in a designer. So let your imagination run wild.

This poster will be seen around Sydney and featured in most theatre magazines as the artwork that represents it.

The target audience is theatre-goers regardless of any factor. Keep in mind the play is being put on stage by cast and crew mostly under the age of 26 though.

City of tomorrow
$145
We are a young&fresh communication agency specialized in web events
17
entries
9
designers
Talent Sphere needs a new design
295 $US
Talent Sphere is a headhunting company specialized in the media industry
5
entries
2
designer graphistes
Modify 1800s magic art for Destroy The Evidence album, Phantasm
145 US$
Help me modify one of these great 1800s magic images for my next album.
34
entries
11
designers
Self Publisher needs a new design
USD 145
I'm an author
27
entries
8
diseñadores
Crime Novel Cover
£395
I am an author writing crime fiction set in Plymouth/Devon in the west of England
171
entries
22
デザイナー数
Juanitos needs a Poster for 2012
$145
the Juanitos are a group of French rock'n'roll which existed since 1991
60
entries
19
designers

We saved a spot for your other graphic design contest.