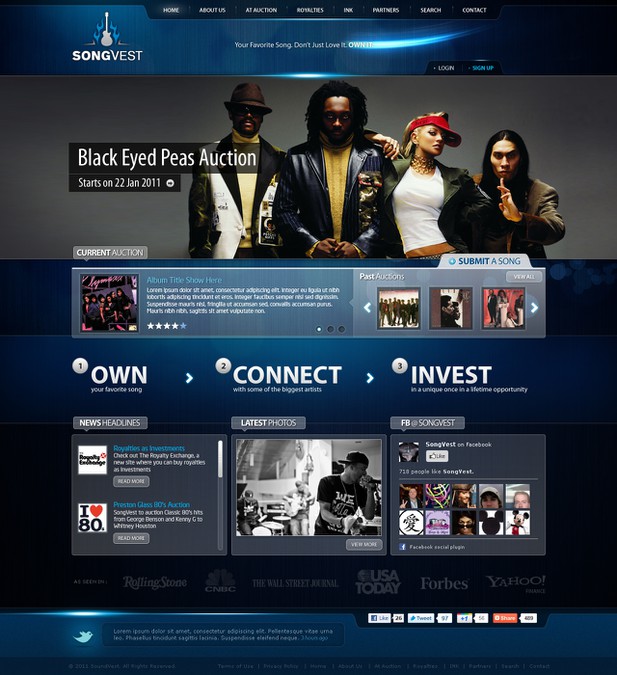 PugNug needed a new web page design and created a contest on 99designs.

A winner was selected from 43 designs submitted by 6 freelance designers. 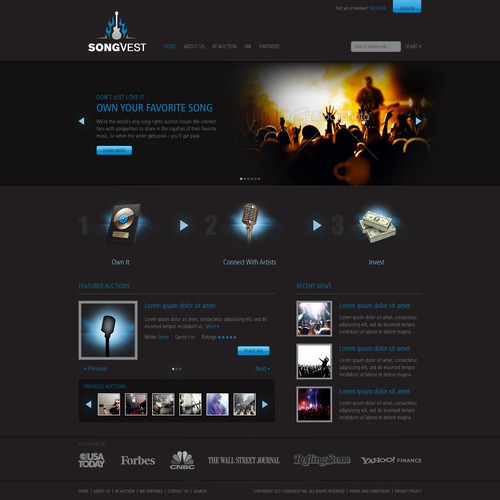 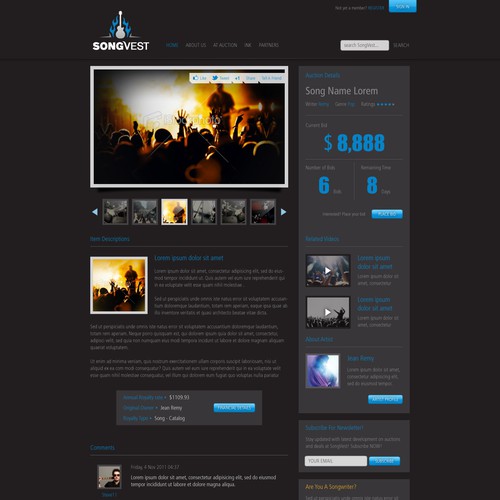 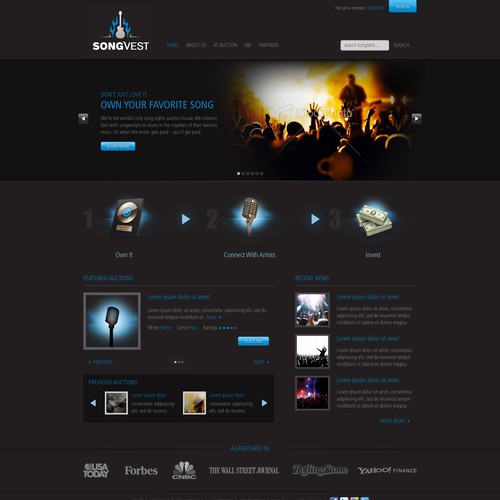 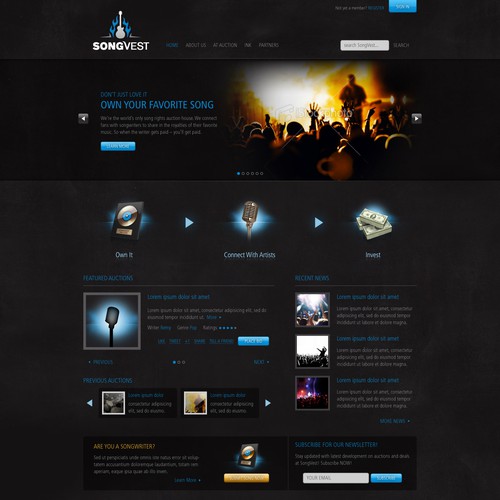 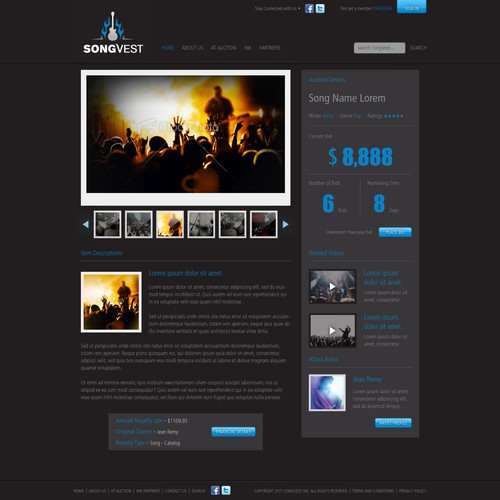 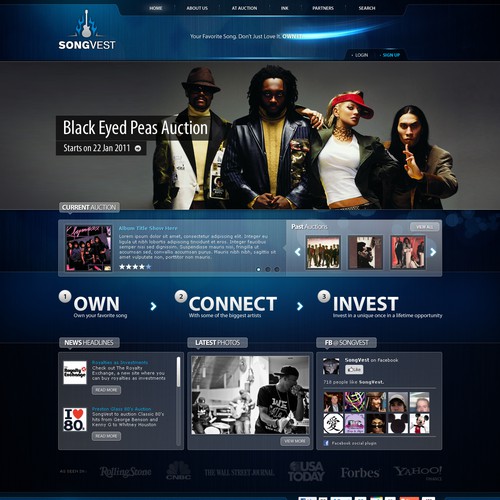 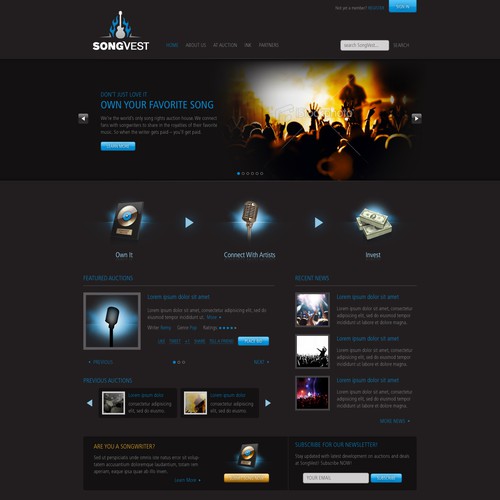 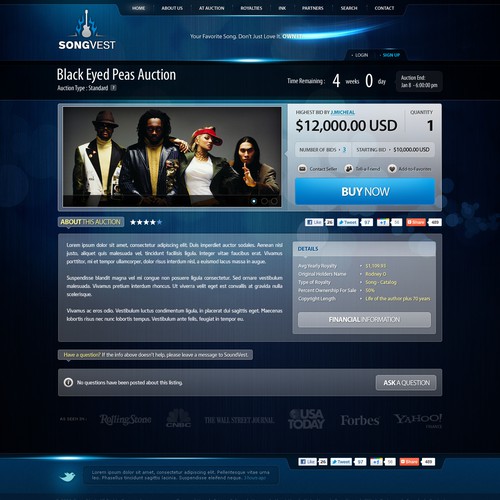 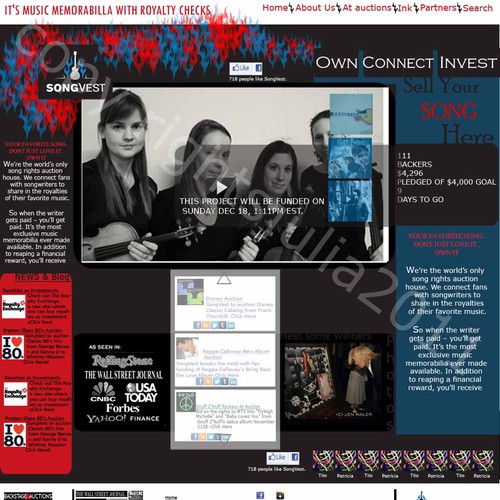 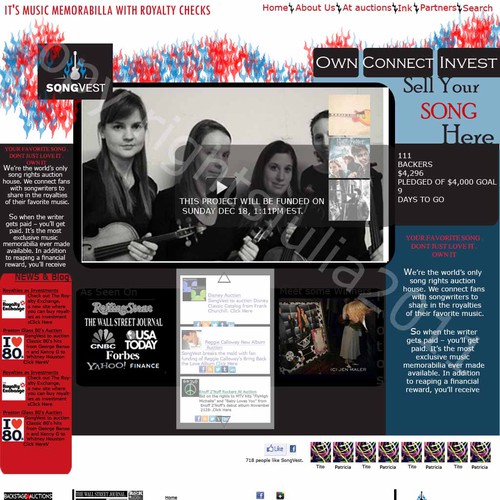 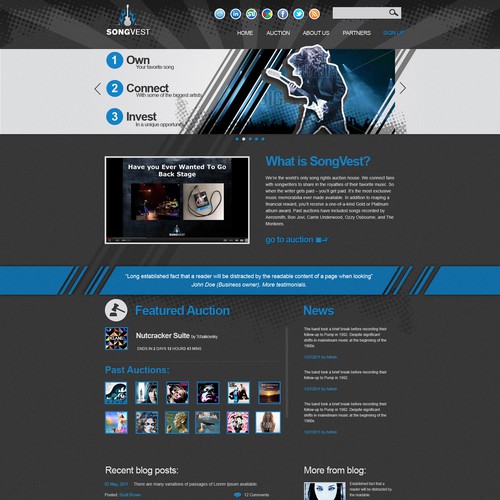 Winner - T6S
It was great working with T6S! He understood our ideas and realized them to our full satisfaction. We would definitely recommend him.
- lobacoo

Finalist - Michael Mayek
I believe Michael used the utmost creativity for my banner! I will certainly work with him on future projects.
- Anonymous

We sell royalty streams of songs to fans and investors

Here are all the pages I listed above and some more to consider:

I like the coloring of our current site (black/blue/white) because I think it works with the theme of our business. However, I'm open to seeing some different color choices used. I'll provide the logo for our current site.

I'm sorry for the next set of CAPS, however, I want emphasize this: WE JUST WANT THE SITE TO LOOK COOL AND ORGANIZED!

I'm 26 years old and know what all the cool internet start-up sites look like. We want that!

- It needs to have an intro describing the company as a whole. We currently don't have a "professional" video describing the whole process (the one in the bottom right sucks) but we hope to in the near future. The design shouldn't be based around this video AT ALL (we want a central focus to it which could be a slideshow). We can adjust later if we decide to have a video. However, it should be a clear/cool/clean emphasis on the whole concept of the site ("Actually OWN a song, connect with the artist and get a great investment at the same time). I like webpages that can fit all the content in one area without scrolling down. However, this might be a little bit too crowded considering the amount of content we will want on it. Either way works with me!

Somewhere near that area we want to have these 3 categories (somewhat of a "1-2-3" points of emphasis kind of deal):

- Since we don't usually have more than 3 auctions going at the same time, we need a cool section for featured auctions. We want a section for the Main Featured auction, as well as, other auctions going on at the same time. We would need a scrolling box (or module) to show the past auctions in a thumbnail format. Overall, we want the site to be able to showcase certain items and still have room for describing the company.

- We will also need the site to be very user-friendly and with the "times" of the internet culture. It needs social connection buttons (Twitter, Facebook, Google+, LinkedIn, Stumbleupon, Reddit, etc...).

-We also want the blog/news section to be in the main part of the site. We want the site to have an active appearance with a clean interface.

- We also want the places the site has been featured in to have just the logos. (See the "featured in" section at the top on Kickstarter: http://www.kickstarter.com/). This can be somewhere towards the bottom. The footer should have links to main parts of the site, recent blog posts/news and our social media accounts. I like some aspects on this site (http://tradeomics.com/). We won't have the same kind of profile system yet but I like the cool, clean and informative design of this one.

- One more "Overall" thing. These are just basic guidelines. Since the site deals with music, we want it to be a cool looking site for music fans. As I stated before, the site does have high financial numbers on the amounts of the songs we sell but we want it to focus on the artist-fan connection.

It also needs to keep the same minimal, clean and informative look to the site. Each auction listing will contain video(s), photos and listing details for each item up for auction. We definitely need larger buttons for "Buy" and "Financial Details"/"More Info". Here is a pretty good example: http://www.kickstarter.com/projects…scover_rec. The video is ours won't be the main section but we want a picture to be though. I particularly like the right top section of this page for displaying the "Current Bid Price and "Number of Bids". Each listing will have an artist bio in additional to the financial information on it such as yearly royalty rate and a number of other factors.

Here is an example of my other site I own: http://www.theroyaltyexchange.com/c…ckage.html. This site is geared towards investors/fans too (more for investors since we are about to add a solar project on there). While I like the design of this site, we DON'T want it to look exactly like this. The clean, informative design is good but we want the new design for SongVest to be more organized with a better layout. The auction listings should also have the social media aspect like the Kickstarter example.

Since we deal with high financial ideas, we want the site to be appealing to fans and investors (mainly fans).

We've sold rights of songs to artists like Aerosmith, Ozzy, The Monkees, Garth Brooks and a number of other big artists. Most of the people that buy songs are buying them for the memorabilia reason, however, buying song royalties is actually a REALLY good investment!

Overall, we want the site to look really cool and still have an appeal for investors. I want to have the same feel as the cool new start-up site out there does with a clean (yet artistic) design. Check out the any sites that blogs like Mashable or TechCrunch are talking about for a general idea

We saved a spot for your web page design contest.

Get started now
Redesign for Budding Actor's Site
USD 599
This is for an budding actor's website who is looking for a more professional design catering towards entertainment a...
47
entries
30
designers
New webdesign for online blog
$ 1.049
We are a website writing about daytime soap operas, our target audience are women, 45+ years old and like soap opera sho
75
entries
34
Designer
Design a Website Page for a Production Company
$1,599
Stage 29 Productions was founded by CEO and Executive Producers, Jay McGraw and Dr. Phil McGraw.
184
entries
44
designers
Redesign of content (recipe, crafts etc) on Sweden's largest Christmas site!
US$ 2.199
Sweden's largest Christmas site! We list Christmas recipes, crafts and other entertainment.
68
entries
7
designers
Music website
$599
(See attached document for details)
73
entries
26
designers
Design a beautiful, contemporary, minimalist website for artists
GBP 1,418
The Better Artist is a blog that teaches people how to draw. (We don't have a website for this brand yet.) In time, we w
181
entries
35
diseñadores
Learn more about web page design
See how it works